Random Thoughts on
Love and Fear
(and anything in between)

We've been neglecting the site, but this is a good thought on which to close out the year. When we last saw Mr. Springsteen with Mr. and Mrs. Obama, he was trying to help them on their way to becoming the President and First Lady 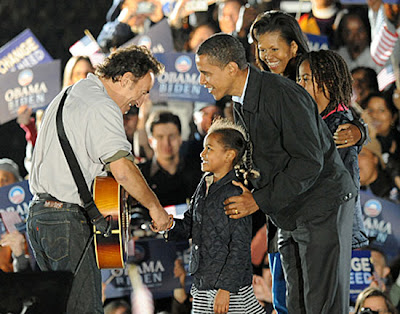 And as noted in this space last year, he had very specific reasons why he wanted to help:

"I've spent most of my creative life measuring the distance between that American promise and American reality. For many Americans, who are today losing their jobs, their homes, seeing their retirement funds disappear, who have no healthcare, or who have been abandoned in our inner cities. The distance between that promise and that reality has never been greater or more painful.

"I believe Senator Obama has taken the measure of that distance in his own life and in his work. I believe he understands, in his heart, the cost of that distance, in blood and suffering, in the lives of everyday Americans. I believe as president, he would work to restore that promise to so many of our fellow citizens who have justifiably lost faith in its meaning. After the disastrous administration of the past 8 years, we need someone to lead us in an American reclamation project. In my job, I travel the world, and occasionally play big stadiums, just like Senator Obama. I've continued to find, wherever I go, America remains a repository of people's hopes, possibilities, and desires, and that despite the terrible erosion to our standing around the world, accomplished by our recent administration, we remain, for many, a house of dreams. One thousand George Bushes and one thousand Dick Cheneys will never be able to tear that house down.

"They will, however, be leaving office, dropping the national tragedies of Katrina, Iraq, and our financial crisis in our laps. Our sacred house of dreams has been abused, looted, and left in a terrible state of disrepair. It needs care; it needs saving, it needs defending against those who would sell it down the river for power or a quick buck. It needs strong arms, hearts, and minds. It needs someone with Senator Obama's understanding, temperateness, deliberativeness, maturity, compassion, toughness, and faith, to help us rebuild our house once again. But most importantly, it needs us. You and me. To build that house with the generosity that is at the heart of the American spirit. A house that is truer and big enough to contain the hopes and dreams of all of our fellow citizens. That is where our future lies. We will rise or fall as a people by our ability to accomplish this task. Now I don't know about you, but I want that dream back, I want my America back, I want my country back.

"So now is the time to stand with Barack Obama and Joe Biden, roll up our sleeves, and come on up for the rising."
While there are complaints about how things have been going in this "rebuilt house", I still think it's been a good year. And as for the "big payback", I think that's illustrated by this picture from a recent reception for the "Kennedy Center Honorees". 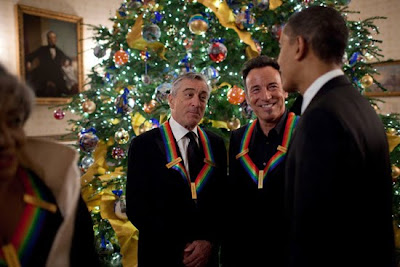 Robert DeNiro, Mr. Springsteen, and President Obama. Is that cool, or what?

Two of the performances from the ceremony, broadcast the other night. First, Melissa Etheridge blows the roof off the place with "Born to Run" -


Then, Eddie Vedder with "City of Ruins" -

- performed in a manner reminiscent of the first time we all heard that song, as an exhortation after 9/11.